1st Annual Conference of the Crisis Observatory – “Austerity and Beyond” 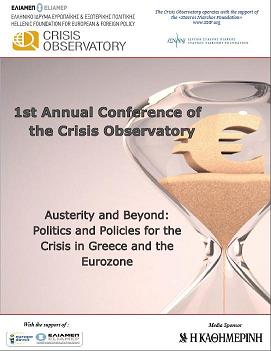 The 1st Annual Conference of the Crisis Observatory of the Hellenic Foundation for European and Foreign Policy (ELIAMEP) on:

“Austerity and Beyond: Politics and Policies for the Crisis in Greece and the Eurozone”

took place on Friday December 13 at the Conference Centre of the Athens Concert Hall (Megaron).

The aim of the conference was to provide an evaluation of the handling of the crisis in Eurozone and Greece and provide an opportunity for the presentation and discussion of new policy proposals.

For the short bios of the participants, press here.  For the presentation (in pdf file) of each participant, press on his name.

The conference opened with addresses by the Head of the Crisis Observatory, Dimitris Katsikas, and the Co-Chief Operating Officer of the “Stavros Niarchos” Foundation, Elli Andriopoulou.

The first session focused on the handling of the crisis on a European level. More specifically, representatives from Portugal, Ireland, Italy and Spain discussed fiscal consolidation, debt sustainability and structural reforms in their countries. Pedro Martins (Professor of Applied Economics, Queen Mary University of London) focused on labour market reforms that were implemented in Portugal following the adoption of the Memorandum. These reforms intended to increase both the flexibility of the labour market and the security of the unemployed. He stressed the importance of Public Employment Services (PES) in the field of training (re-skilling) of human capital and supporting the unemployed. Alan Ahearne (Head of Economics, Cairnes School of Business and Economics, National University of Ireland) attempted a survey of the course of the Irish economy through the last decades, tracing the source of the crisis to the reliance of economic growth on the construction sector, whose bubble burst in 2008. He seemed optimistic that Ireland will be able to borrow from international markets in 2014, at a rate of around 3.5%, while noting that households and banks will need to further de-leverage during the coming years. Paolo Manasse (Professor of Macroeconomics and International Economic Policy, University of Bologna) traced the roots of the European crisis to the heterogeneity of European economies, but also to supply factors and demand shocks. The close interconnection of the last two makes the need for reforms urgent. With the use of econometric methods, he claimed that entering the euro, benefited Italy in terms of trade, was rather indifferent in terms of inflation and in borrowing costs, but quite surprisingly was negative in terms of labour productivity. Morten Olsen (Assistant Professor of Economics, IESE Business School, University of Navarra) traced the source of the Spanish economic crisis both to the real estate market crisis, as well as to the operation of the Cajas (savings banks). He questioned the assumption that the country will be able to achieve a growth rate larger than 2% in the coming years and noted that unemployment will remain at high levels. Given low growth rates, reforms in labour market must be promoted, the security of unemployed should be enhanced, but also allowances and systems of social benefits have to be rationalized (for the video of the first session, press here).

The keynote speaker was Philippe Legrain (Former Principal Adviser, Head of the Analysis Team, Bureau of European Policy Advisers (BEPA), European Commission), who attempted to evaluate the response of the Eurozone to the Crisis. He mentioned five major policy mistakes in the handling of the crisis, including the failure to write-down Greek debt at the beginning of the crisis, the provision of a fiscal backstop for the banking sector, without restructuring it and the imposition of a harsh front-loaded, “slash and burn” austerity policy. He proposed a threefold solution comprising banking sector restructuring, public and private debt restructuring and the reinforcement of investments to boost demand. Specifically for Greece, he proposed a New Marshall Plan, accompanied by bank and debt restructuring. He stressed that reforms in Europe must target the strengthening of competition and not focus on competitiveness (for the video of the keynote lecture, press here).

The second session of the conference was focused on the Greek economy, emphasizing policies for the road to recovery. George Argeitis (Associate Professor of Macroeconomics, University of Athens) spoke about internal devaluation in Greece, noting that the fiscal consolidation programme operated against the cohesion of the labour market, leading to traps of austerity, liquidity and recession. He noted that we have to re-examine the strategic architecture of the country’s debt, and the requirement to cover debt obligations through the achievement of large primary surpluses. Nikos Christodoulakis (Professor of Economic Analysis, Athens University of Economics and Business) presented data that showed that Greece is not amongst the worst economic performers of the EU anymore. Nevertheless, he noted five mistakes of the fiscal consolidation programme that continue to constrain growth, such as over-taxation, horizontal cuts in the public sector, deep recession, the failed privatization programme and bank re-capitalization. He emphasized the problem of mispredictions by the EU and Greek authorities and proposed more realistic fiscal targets, a reduction of Greece’s borrowing interest rate by 1% and a focus on growth policies. Paul Mylonas (Chief Economist, General Manager for Strategy and Research and Head of Investor Relations, National Bank of Greece) discussed liquidity and the restoration of credit. He noted that the EU and the IMF are the only sources of funds flowing into the Greek economy; a fact that makes evident the need to attract other forms of funding and investment. Nikos Vettas (General Director, Foundation for Economic and Industrial Research (IOBE) and Professor of Economics, Athens University of Economics and Business) noted that the principal conditions for a return to growth are the restoration of liquidity, the limitation of the reduction of domestic private consumption, the achievement of a more effective public investment programme for infrastructure and structural reforms, especially those that clarify the roles of the public sector, the private sector and the households. Daphne Nicolitsas (Deputy Director, Economic Research Department, Bank of Greece) examined the Greek cyclical unemployment, highlighting both current trends and future prospects. She noted that the importance of competitiveness was not adequately emphasized and kept deteriorating before the crisis, while the expansion of non-tradable good sectors was disproportionate to that of tradable goods sectors. Nonetheless, she was confident that the high cyclical unemployment will not necessarily become high structural unemployment, given the existence of a highly-educated stock of human capital in Greece.

The conference ended with a round table discussion between Tassos Giannitsis (former Minister, Professor Emeritus, University of Athens), Stelios Ramfos (Philosopher, Author) and Loukas Tsoukalis (ELIAMEP and Professor of European Integration, University of Athens). The subject of the discussion was whether national consensus in Greece is possible. Stelios Ramfos underlined the negative historical contribution of a Greek tendency to adopt a “private” outlook of life (as contrasted to a public/ citizen outlook) to Greek society’s difficulties to achieve consensus. He noted the importance of the emergence of moral principles on a political level, in order to restore the trust of society in the political system. Tassos Giannitsis noted that in Greece we have achieved consensus, but not in the fields that we should (e.g. corruption, tax evasion, etc). In this context, reinforcing trust in the structures and institutions of the Greek society and restraining the predatory attitude of the state, are critical. Loukas Tsoukalis noted that the prosperity of the country was for many years disproportionate to the productive capabilities and inherent social attributes of the country and thus it was illusive. The economic crisis was transformed in a deep political and social crisis that has led to the de-legitimation of the political system and the emergence of various types of indignant citizens.

For the Analytic Programme of the Conference, press here.

The conference was sponsored by Europe Direct ELIAMEP and Bank of Greece.

The Crisis Observatory is sponsored by the “Stavros Niarchos Foundation”.