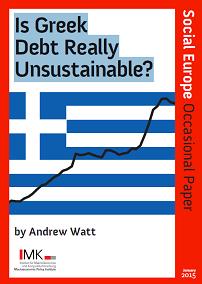 Greece will go to the polls on January 25th and everybody from German conservatives to Greek leftists seems to agree: Greek public debt is unsustainable. A haircut on investors and some form of partial default – more politely known as debt restructuring – is the only answer.

On the face of it, this is understandable. As Fig. 1 shows1 Greek public debt exploded during the crisis from around 100% of annual GDP to more than 170% in 2011. If fell back temporarily in 2012 thanks to the haircut imposed on investors, and cuts in the interest rate. But in 2013 and again in the year that has just ended it rose once again, reaching more than 175% of GDP. And this is despite the debt restructuring and swingeing cuts in public spending and tax hikes. It would seem that a further round of debt restructuring is unavoidable. However, a closer look reveals this is far from inevitable. To see why one needs to look both at the situation in Greece itself, but also consider the policy context within the monetary union as a whole. All that Greece needs is a little nominal economic growth.