Reforms in Public Administration under the crisis: Overview, Description, Evaluation 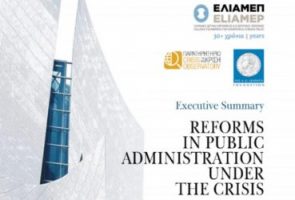 The weaknesses of public administration were considered an important factor in the outburst of the recent economic crisis in Greece. In this spirit, administrative reforms were an integral part of the economic adjustment programmes, with the aim and ambition to deal with long-lasting inefficiencies.

Under the adverse circumstances of budgetary contraction, public administration served as both the tool and the object of an ambitious reform agenda, the results of which have not yet been evaluated. How far have the reforms during the last eight years progressed? Towards which direction has the administration moved? Was its efficiency upgraded?

The research conducted by ELIAMEP, with the support of the A.G. Leventis Foundation Research Chair, sought to answer these questions. The resulting report aims to offer an opportunity to promote agreement on needed reforms and outline the conditions necessary to upgrade a sector critical for the country’s prospects.

You can find the Executive Summary of the main findings and conclusions of the report here.

The full report is available here (in Greek).