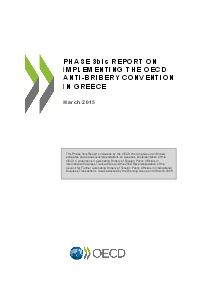 There are also concerns about enforcement and detection. Greece has seven on-going foreign bribery investigations, which is a welcome development. However, one case was closed without a thorough investigation. Investigations initially were not opened into several other allegations despite investigations or convictions in foreign jurisdictions against foreign officials for receiving bribes from Greek nationals. Most of the allegations that led to investigations were provided by the Working Group and were not detected by the Greek authorities. The Working Group therefore recommends that Greece urgently raise the priority given to fighting foreign bribery, and take all necessary measures to assess and investigate allegations seriously and without delay. Sufficient resources and training must be provided to prosecutorial and investigative authorities, as questions remain over Greece’s capacity to handle complex economic and corruption cases. Greece must develop and implement a strategy to proactively detect foreign bribery cases that draws on diverse sources of information. It should analyse why its embassies have not forwarded foreign bribery allegations to prosecutors. Whistleblowers in the private sector should be better protected.

The report and its recommendations reflect findings of experts from Ireland and Republic of Korea and were adopted by the Working Group on 13 March 2015. The report is based on legislation and other materials provided by Greece, and research conducted by the evaluation team. It is also based on information obtained by the evaluation team during its on-site visit to Athens on 4-6 November 2014, during which the team met with representatives of Greece’s public and private sectors, judiciary, civil society, and media. Within one year of the Working Group’s approval of this report, Greece report orally to the Working Group on its implementation of certain recommendations. It will submit a written report on its foreign bribery enforcement actions and the implementation of all recommendations within two years.