Understanding the Greek Crisis: Answers to Key Questions about the State, the Economy and Europe (in Greek) 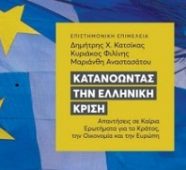 The book “Understanding the Greek Crisis: Answers to Key Questions about the State, the Economy and Europe”, edited by Dimitris Katsikas, Kyriakos Filinis, and Marianthi Anastasatou, has been published.  The book is the result of an initiative by ELIAMEP’s Crisis Observatory and its objective is to offer answers to much debated questions about the Greek crisis.

Is the Greek public debt sustainable? Is it possible to sustain high primary fiscal surpluses continuously for many years? Are Greeks over-taxed? Is the Greek public sector too big? Can Greece become more competitive by reducing wages alone? What is the purpose of all the structural reforms that are being promoted? Did the labour market reform have the desired results? Has Europe exhibited solidarity to Greece? Where did the money from the bailouts programmes go? What was the stance of the European Central Bank vis a vis Greece? Were the bailout programmes dictated primarily by the desire of Greece’s creditors to rescue their own banks?

Seven years after the signature of the first bailout programme and while the Greek economy is still trapped in a deep crisis, these questions have been debated in the public discourse endlessly and intensely, typically without the necessary clarity, moderation and evidence-based argumentation.

In its effort to contribute to an informed public discourse, the Crisis Observatory, an initiative of the Hellenic Foundation for European and Foreign Policy (ELIAMEP) asked experts to discuss these issues.

The answers provided, are not meant to be the last word on these issues. Rather, the objective is to present analyses based on data and well-supported arguments, which could help kickstart the transition to a more moderate and evidence-based public discourse about the crisis.