Roe, Mark, (2012), ‘Greece and the Limits of Anti-Austerity’, www.project-syndicate.org, 19 June. Is austerity dead? At last month’s G-8 meeting at Camp David, the German-led austerity program for the eurozone’s troubled southern members ran up against substantial resistance

Bennhold, Katrin, (2012), ‘What History Can Explain About Greek Crisis’, www.nytimes.com, 6 June. The decision to suspend Greece from the common currency became inevitable when it emerged that Athens had fiddled with the accounts yet again amid chronic economic weakness, forfeiting what credibility in the international arena it still had left.

Tilford, Simon,   (2012), ‘Greece and the eurozone: Managing the crisis’, www.cer.org.uk, 29 Μαίου. How the eurozone handles Greece will determine whether or not the single currency survives – and hence the future of the European Union as a whole.

Sotiropoulos, A., Dimitris, (2012), “The paradox of non-reform in a reform-ripe environment: lessons from post-authoritarian Greece”, Kalyvas, St., Pagoulatos, G., and Tsoukas, H., (eds), From Stagnation to Forced Adjustment: Reforms in Greece, 1974-2010, London and New York: Hurst Co. and Columbia University Press. In May 2010, following the Memorandum of Understanding between the Greek government and the Troika (IMF, EU and ECB), a rescue package was offered to Greece, in …Read More 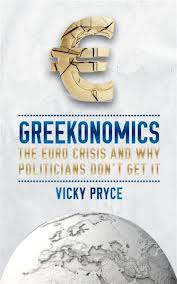 Pryce, Vicky, (2012), Greekonomics: The  Euro Crisis and Why Politicians don’t get it, Biteback Publishing. Economist Vicky Pryce reflects on the current crisis in the Euro Zone its causes and how Europe has responded, and offers her thoughts on what might and what needs to happen if the Euro is to survive in its current form. She pays particular attention to Greece, the country of her birth, the country first …Read More 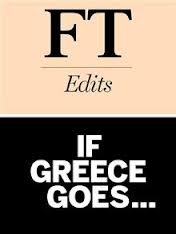 Financial Times, (2012), If Greece goes…;The impact of a Greek default on Europe and the world economy, Penguin Books. The Financial Times, the global business newspaper, has led the field with its coverage of the eurozone crisis and Greece’s political and financial chaos. As the chances of a Greek exit from the eurozone grow, the FT’s specialist correspondents and authoritative columnists dissect the potentially devastating consequences for businesses and governments …Read More

Doxiadis, Aristos, Matsaganis, Manos, (2012) “National populism and xenophobia in Greece”,  www.opendemocracy.net, 27 November. “National exceptionalism’ has long served as an antidote to the many disappointments that being a Greek has often entailed. But historically, has this now opened the door to populist forces in Greece’s political culture?”