International Monetary Fund, (2016), “World Economic Outlook: Subdued Demand: Symptoms and Remedies”, IMF, October Global growth is projected to slow to 3.1 percent in 2016 before recovering to 3.4 percent in 2017. The forecast, revised down by 0.1 percentage point for 2016 and 2017 relative to April, reflects a more subdued outlook for advanced economies following the June U.K. vote in favor of leaving the European Union (Brexit) and weaker-than-expected …Read More

Labouré, Marion, Braunstein, Juergen, (2016), “The Great Stagnation”, LSE Euro Crisis in the Press, 4 October The recent Brexit vote, as well as high uncertainty around a number of upcoming elections (e.g., the 2016 US and 2017 French presidential elections), are only symptoms of a larger underlying problem. Voting for populist and extremist campaigns is a mean of expressing discontent with the status quo, but with far reaching implications. We believe there …Read More

Scheubel, Beatrice, Stracca, Livio, (2016), “What we really know about the global financial safety net”, VoxEu, 4 Οctober The global financial safety net is one of the key infrastructures of financial globalization. However, its current constellation does not reflect a coherent design, but rather the interaction of different instruments used for different purposes and developed over time. This column presents the first database that brings together all of the relevant …Read More

Jacob Funk Kirkegaard, (2016), “What Deutsche Bank’s Troubles Tell Us about the Health of Europe’s Banking System”, Peterson Institute for International Economics, 30 September The stock of Germany’s largest bank, Deutsche Bank, is currently trading at multi-decade lows and the bank is edging closer to suffering a general crisis of confidence, which could see investors pull their business from the bank and even depositors wanting their money out. We are not …Read More

Hüttl, Pia, Schoenmaker, Dirk, (2016), “Fiscal capacity to support large banks”, Bruegel, 3 Οctober During the global financial crisis and subsequent euro-debt crisis, the fiscal resources of some countries appeared to be insufficient to support their banking systems. These countries needed outside support to stabilise their banking systems and thereby their wider economies. This Policy Contribution assesses the potential fiscal costs of recapitalising large banks. Based on past financial crises, we estimate that the …Read More

Ariu, Andrea, (2016), “Crisis-proof services”, VoxEU, 3 Οctober Following the failure of Lehman Brothers in September 2008, trade in goods experienced the steepest decline ever recorded, with both exports and imports dropping four times more than income (Freund 2009, Levchenko et al. 2010). The fall was severe, highly synchronised across countries, and mostly concentrated in the category of durable goods (Baldwin 2009). Surprisingly, trade in services was relatively unaffected by the …Read More 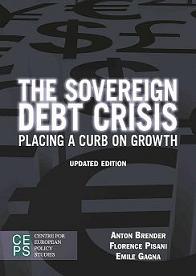 Brender, Anton, Pisani, Florence, Gagna, Emile, (2012), “The Sovereign Debt Crisis Placing a Curb on Growth”, CEPS, 15 May To ward off the threat of a worldwide depression that loomed at the end of the 2000s, governments opted to run up substantial fiscal deficits. In doing so, they sowed the seeds of the sovereign debt crisis. Saddled with often high debt burdens and modest growth prospects, developed countries’ governments must …Read More

Lydon, Reamonn, Lozej, Matija, (2016), “The flexibility of new hires’ earnings during a recession”, VoxEu, 2 October The evolution of earnings over the business cycle has important implications for consumption and welfare. This column shows that the earnings of new hires in Ireland – and in particular, new hires with less valuable outside options – are substantially more flexible than those of incumbents during a recession. The results indicate that …Read More

Gaspar, Vitor, Obstfeld, Maurice, Sahay, Ratna, (2016), “Macroeconomic Management When Policy Space Is Constrained: A Comprehensive, Consistent, and Coordinated Approach to Economic Policy”,  IMF Staff Discussion Note, 28 September Concern is widespread that countercyclical policies have run out of space or lack the power to raise growth or deal with the next negative shock. The common perceptions are that the effective lower bound on policy interest rates limits the room to loosen monetary …Read More