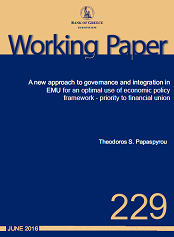 Papaspyrou, Theodoros, S., (2017), “A new approach to governance and integration in EMU for an optimal use of economic policy framework – priority to financial union”, Bank of Greece Working Paper 229, June

This paper proposes a new approach to EMU governance and integration consisting of the following elements: (i) an optimal use of the existing EU institutional framework for economic, fiscal and financial policies is necessary and possible at each level of EMU integration that is politically feasible, in order to strengthen synergies between stability and growth policies, complete the single market, support public and private investment, and improve macroeconomic and fiscal coordination and surveillance, (ii) priority should be given to financial union which would facilitate the smooth transmission of monetary policy, enhance financial stability and economic growth and contribute to macroeconomic stabilization through private risk sharing, (iii) the drive to fiscal union should be focused on the creation of fiscal backstops to banking union, enhancing its solidity and credibility (iv) initiatives towards deeper EMU integration should be undertaken where there is strong evidence, within the EU and beyond, of their usefulness and for which widespread political support exists, maximizing benefits and avoiding controversial proposals, and (v) institutional strengthening and democratic accountability are indispensable elements for a successful EMU and should be pursued by following the “Community approach”, based on the Treaties, in contrast to the “intergovernmental approach” increasingly used in recent years.