Brown, Gordon, (2012), ‘Europe’s three dimensional crisis’, www.guardian.co.uk, 28January. In the rush to define Europe’s problems as fiscal, our deep-seated banking and competitiveness problems have been largely ignored. In the search for a simple, one-dimensional answer – austerity and, if that fails, more austerity – to what is a three-dimensional crisis, Europe’s leaders are failing to grasp the profound historical forces now reshaping Europe’s role in the world. For without complementary …Read More

Tsoukalis, Loukas, (2011), ‘The Shattering of illusions – And What Next?’, Journal of Common Market Studies, Annual Lecture, Volume 49, Issue Supplement 1, pages 19–44, September 2011. The European Union (EU) entered the new century on a wave of euroenthusiasm. Many people were convinced that integration was running fast again, and the process would be unstoppable. Some went further, predicting that the 21st century would be the century of Europe, …Read More 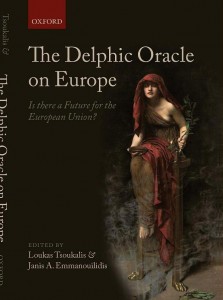 Featherstone, Kevin, (2011), ‘The Greek Sovereign Debt Crisis and EMU: A Failing State in a Skewed Regime’, Journal of Common Market Studies, Vol. 49, Issue 2, p.p. 193–217. The Greek sovereign debt crisis of 2010 exposed the weaknesses of governance of both the ‘euro area’ and of Greece. Successive governments in Athens had failed to overcome endemic problems of low competitiveness, trade and investment imbalances, and fiscal mismanagement placing the …Read More

CEPS, (2012), Regulation of European Banks and Business Models: Towards a new paradigm, Brussels.

Tsoukalis, Loukas, (2012), ‘Steering Europe out of the Crisis’, Policy Network Working Paper. Europe must avoid at all costs a prolonged double-dip recession, with the weakest members of the Eurozone leading a desperate suicide dance. The key challenges lie in balancing the burden of adjustment between creditors and debtors, regaining confidence in the irreversibility of Europe’s currency union and restoring the political capacity of both national and European institutions to …Read More