Economist, (2015), “The sticky superpower”, Special Report, 3 October IN JUNE THIS year Jack Ma, the founder of Alibaba, a giant Chinese e-commerce firm, addressed the Economic Club of New York, whose members include many Manhattan luminaries and Wall Street chiefs. Mr Ma’s message was that his company exists for the long-term good of society, a far cry from the creed of shareholder value followed by many in the room. …Read More

Harbour, Malcolm, (2015), “Strengthening the beating heart of the European economy”, European Policy Centre Publications, 29 September In an atmosphere of crisis, distrust and fragmentation, policy-makers in Brussels are mostly focused on fighting fire without having an ambitious vision for the future – in effect, muddling through, as has been the characteristic response in recent years. However, by remaining in crisis response mode, the European Union (EU) is failing to provide …Read More

Mukand, Sharun, Rodrik, Dani, (2015), “The political economy of liberal democracy“, Voxeu, 29 September There are more democracies in the world than non-democracies, but few of the democracies go beyond electoral competition. This column highlights the contrast between electoral democracies and liberal ones, that is, those that protect civil rights in addition to political and property rights. Liberal democracies are rare because the failure to protect minority rights is a common consequence of the …Read More

Aiyar, Shekhar, Ilyina, Anna, (2015), “A Strategy for Resolving Europe’s Problem Loans”, IMF Direct blog, 24 September Problem loans are clogging the arteries of Europe’s banking system. The global financial crisis and subsequent recession have left businesses and households in many countries with debts that they cannot repay. Nonperforming loans as a share of total loans in the EU have more than doubled since 2009, reaching €1 trillion—over 9 percent of the region’s …Read More

Hanska, Max, (2015), “Europe’s Gravest Threat: Doctrines Diverged”, LSE blog, 23 July Europe’s fiscal and economic crisis has revealed rifts in, what is often assumed to be a common understanding of the ‘European Project.’ Nowhere did the fact that different nations understand the ‘European Project’ quite differently come to a fore as explicitly as during 17 hour negotiations over a 3rd ESM programme for Greece—and particularly, in what different European nations view as …Read More 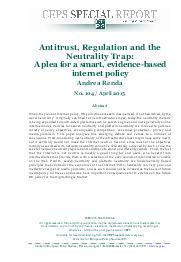 Renda, A. (2015) “Antitrust, Regulation and the Neutrality Trap: A plea for a smart, evidence-based internet policy, CEPS Special Report Νο. 104, 17 April.   When they look at Internet policy, EU policymakers seem mesmerised, if not bewitched, by the word ‘neutrality’. Originally confined to the infrastructure layer, today the neutrality rhetoric is being expanded to multi-sided platforms such as search engines and more generally online intermediaries. Policies for search …Read More

Galbraith, K. J. (2015) “The Real Thing: An Anti-austerity European Government“, Social Europe Journal, 07 April.   I have just come from Athens where I have, for the last several days, had the high privilege of working with the government of Greece, and especially with the Finance Minister, my very good friend, Yanis Varoufakis. I’ve actually had two occasions, so far, to observe the drama that’s unfolding in Europe from …Read More

Gaspar, V. (2015) “Fiscal Policy And Structural Reform“, iMFdirect, 27 March.   One of the big questions to emerge from the global financial crisis, especially in the euro area, is how to raise a country’s potential growth while restoring healthy public finances. For example, the euro area— despite some favorable news recently — faces marked-down growth prospects alongside high levels of public debt. The combination of high debt and tepid …Read More

Dhingra, S., Ottaviano, G. & Sampson, T. (2015) “Should the UK stay or go? The economic consequences of Britain leaving the EU“, LSE EUROPP, 24 March.   How would a British exit from the EU affect the UK’s economy? Swati Dhingra, Gianmarco Ottaviano and Thomas Sampson outline the economic consequences of a Brexit, writing that reduced integration with EU countries is likely to cost the UK economy far more than is gained …Read More

Jacques Attal (2015) “Think differently about the Right and the Left, L’ Express Blog, 09 March.   While political parties, doctrines and party platforms might not want to admit it, there is a certain, albeit slow, shift in the traditional Left-Right cleavage in the practice of governments all over the world: As so often happens, practice precedes doctrine and creates it. Clearly there is still on the one hand the …Read More