The Greek Crisis in the Media 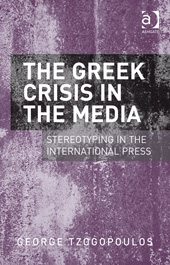 Tzogopoulos, George, (2013), The Greek Crisis in the Media, Ashgate.

The portrayal of Greece by the international press during the financial crisis has been seen by many independent observers as very harsh. The Greeks have often been blamed for a myriad of international political problems and external economic factors beyond their control. In this original and insightful work George Tzogopoulos examines international newspaper coverage of the unfolding economic crisis in Greece. American, British, French, German and Italian broadsheet and tabloid coverage is carefully analysed. The Greek Crisis in the Media debates and dissects the extent to which the Greek response to the financial crisis has been given fair and balanced coverage by the press and questions how far politics and national stereotypes have played their part in the reporting of events. By placing the Greek experiences and treatment alongside those of other EU members such as Portugal, Ireland, Italy and Spain, Tzogopoulos examines and highlights similarities and differences in the ways in which different countries tackled the challenges they faced during this crucial period and explores how and why the world’s media reported these events.